Tickets are NFTs that allow you to participate in Aavegotchi Raffles to win prizes. They can be purchased using FRENS obtained from staking or on the Baazaar using GHST tokens.

In this page, you will learn how to purchase tickets using FRENS and to participate in raffles using those tickets!

Once you have enough FRENS, head to the Shop Bulk Buy user interface to purchase tickets with FRENS.

Unlike FRENS, Tickets can be transferred from one wallet to another. They can also be bought/sold on secondary marketplaces such as the Baazaar.

The current supply of Tickets can be determined using the OpenSea Polygon interface here.

There are two main categories of tickets:

Raffle tickets can be subdivided into six different subcategories, ranging from Common (least valuable) to Godlike (most valuable). These are used to participate in Wearable Raffles or Aesthetica Raffles.

On the other hand, Drop Tickets are used to participate in NFT Raffles to win Portals and REALM Parcels.

Users are allowed to buy tickets belonging to different categories in a single transaction. You do not need to create separate buy transactions for each category of raffle ticket.

A raffle runs for a period of time. During this period, you can submit your tickets for a chance to win prizes. Submitting tickets into the draw involves a transaction on Polygon; it is not done automatically. If you have many different categories of raffle tickets and wish to enter them together as a bundle, this is also possible. You do not need to create separate transactions for entering each category of tickets into the raffle.

When the raffle is over, you can find out what prizes you have won and can claim them.

If you choose not to participate in a given Raffle, you do not need to do anything with your tickets. You can also accumulate tickets for subsequent raffles if you like to do so.

As an example, the first wearable raffle had a Chainlink Theme. Here were the prizes for the raffle: 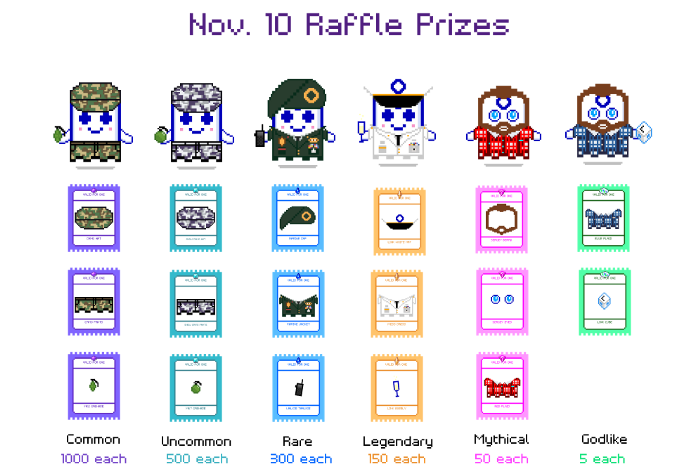 Each prize will be allocated to a randomly drawn raffle ticket, where each ticket has an equal chance of winning.

You can improve your probability of winning by:

After the raffle has concluded, winners can claim their prizes on Polygon.

The entire process of staking GHST and winning prizes can be illustrated using the following infographics:

Knowing how to stake FRENS and participate in Raffles is good, you say. But what about the numbers? What are the probabilities of winning a wearable based on past raffles? Visit the Raffles Statistics page for the historical data.