REALM gameplay is coming soon! There will be plenty of activities in the Gotchiverse — from socializing to communal channeling at a Gotchi Lodge. Get to know more frens and participate in Guild-only activities here!

Gotchi Lodges will be accessible to Gotchis with a "Guild Crest." A Guild Crest is a particular NFT that must be held or equipped by an Aavegotchi.

There are 2 types of Guild Crests:

Guild Channeling (also known as Communal Channeling) is a ritual that Guild members can engage in every week to summon Alchemica to rain down nearby from the Gotchiverse.

Alchemica earned is dependent on the following 3 factors:

The Base Channel Rate will initially be set at 20 FUD, 10 FOMO, 5 ALPHA, and 2 KEK. This Rate may need to be adjusted by the community over time to prevent going over the Alchemica budget for Alchemical Channeling (25% of total supply over the lifetime of the game, 50% of which is allocated to Guild Channeling).

Every extra Aavegotchi holding the designated Wearable that joins in the ritual increases the total by the Base Channel Rate Gotchi Presence, which results in exponentially more Alchemica being dropped:

Wearable Crest Rarity Multiplier designates the base rate at which Alchemica is dropped:

Linking your Guild to a Crest

A Gotchi Lodge has to link with a Wearable Crest on-chain before it can engage in Alchemical Channeling. Initially, only one Guild can use each Wearable.

This ERC-1155 Crest cannot be purchased off the open market, but must be won in a Bid-to-earn Auction using GLTR. Auctions will be held every three months for all Wearable Crests, and the winners of those auctions will automatically be transferred the Wearable Crests on-chain, thus earning their Guild the privilege to engage in Guild Channeling.

This gives a strong incentive for Guilds to hold and LP their Alchemica, to continue earning GLTR, and providing Guild Channeling for their members.

Each Gotchi Lodge can mint an onchain ERC-1155 Insignia Crest for its members, to allow access to the Lodge without holding the Wearable Crest. The Lodge owner can update the Crest metadata to change the name and appearance of the Crest, but not the Crest’s onchain ID.

Guilds organize themselves in districts. The following guild map has been compiled by MonsterRNG#3333 of Avid Aavegotchis 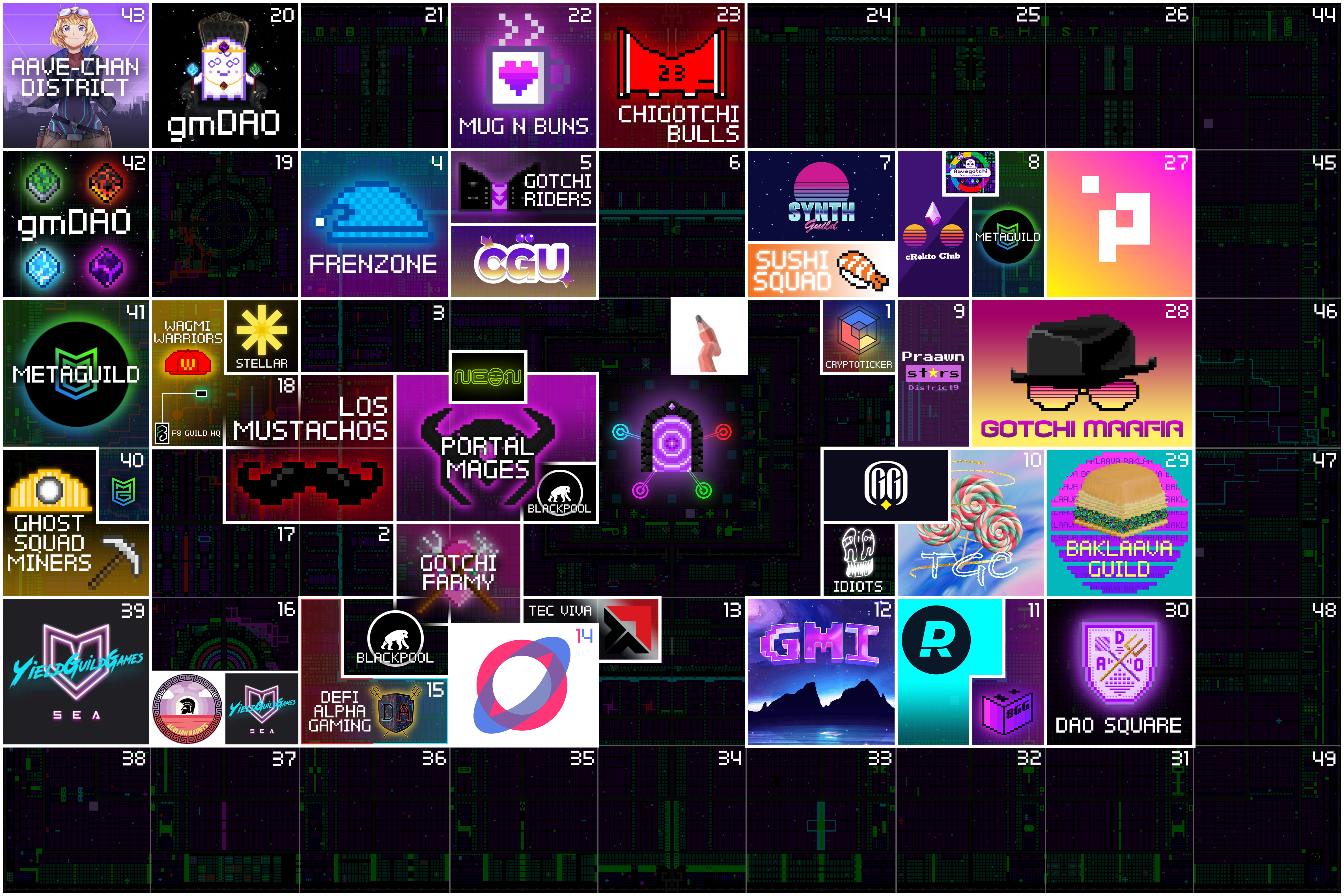