Aavegotchi is a DeFi-enabled crypto collectibles game developed by Singapore-based Pixelcraft Studios that allows players to stake Non-fungible tokens (NFTs) avatars with interest-generating tokens and interact with the Aavegotchi metaverse. It is a unique combination of Decentralized Finance (DeFi) and NFTs.

Aavegotchis are pixelated ghosts living on the Ethereum blockchain, backed by the ERC-721 standard. Their value is determined by rarity level, which is calculated via multiple factors, such as base traits, amount of staked collateral/aTokens, and equipped wearables.

To level up their Aavegotchis, players can participate in a variety of activities including mini-games, governance, and meetups. Aavegotchis can also increase their rarity level by equipping in-game wearables and leveling up.

Rare Aavegotchis not only have higher secondary baazaar value, they also enable the Aavegotchi to perform better in rarity farming—a minigame that rewards the rarest Aavegotchis with GHST tokens.

Aavegotchi is governed by AavegotchiDAO that manages all funds generated through the GHST token distribution.

Aavegotchis are rare crypto-collectibles living on the Ethereum blockchain, backed by the ERC-721 standard used in popular blockchain games such as CryptoKitties, Axie Infinity, and Cryptovoxels. Aavegotchis possess three attributes that determine their overall value and rarity within the Aavegotchi universe: collateral stake, traits, and wearables.

The relationship between Collateral stake, Traits, Wearables, and Kinship is best represented by an Onion Diagram (see below). Each layer builds upon the previous layers, with the sum being the Aavegotchi itself! 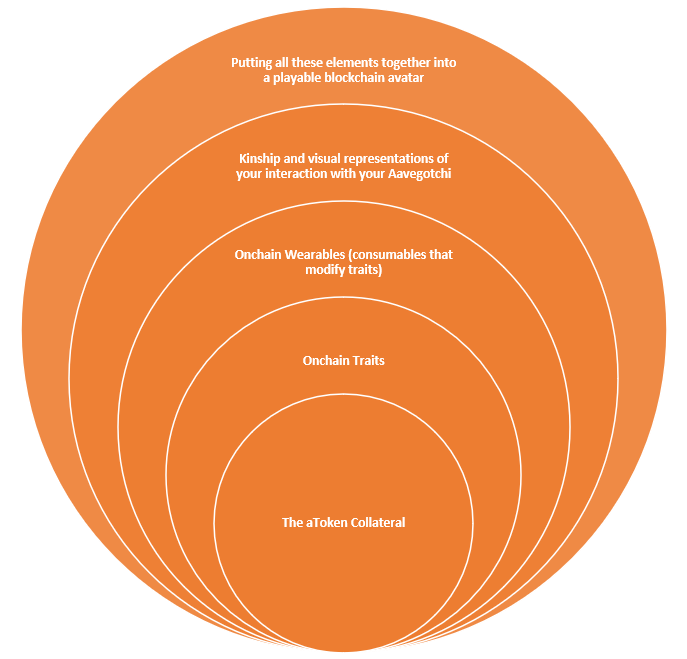 The valuation of an Aavegotchi comes from both from its intrinsic value and from its rarity value.

The Aavegotchi Universe encompasses all the elements that allow Aavegotchis to operate: