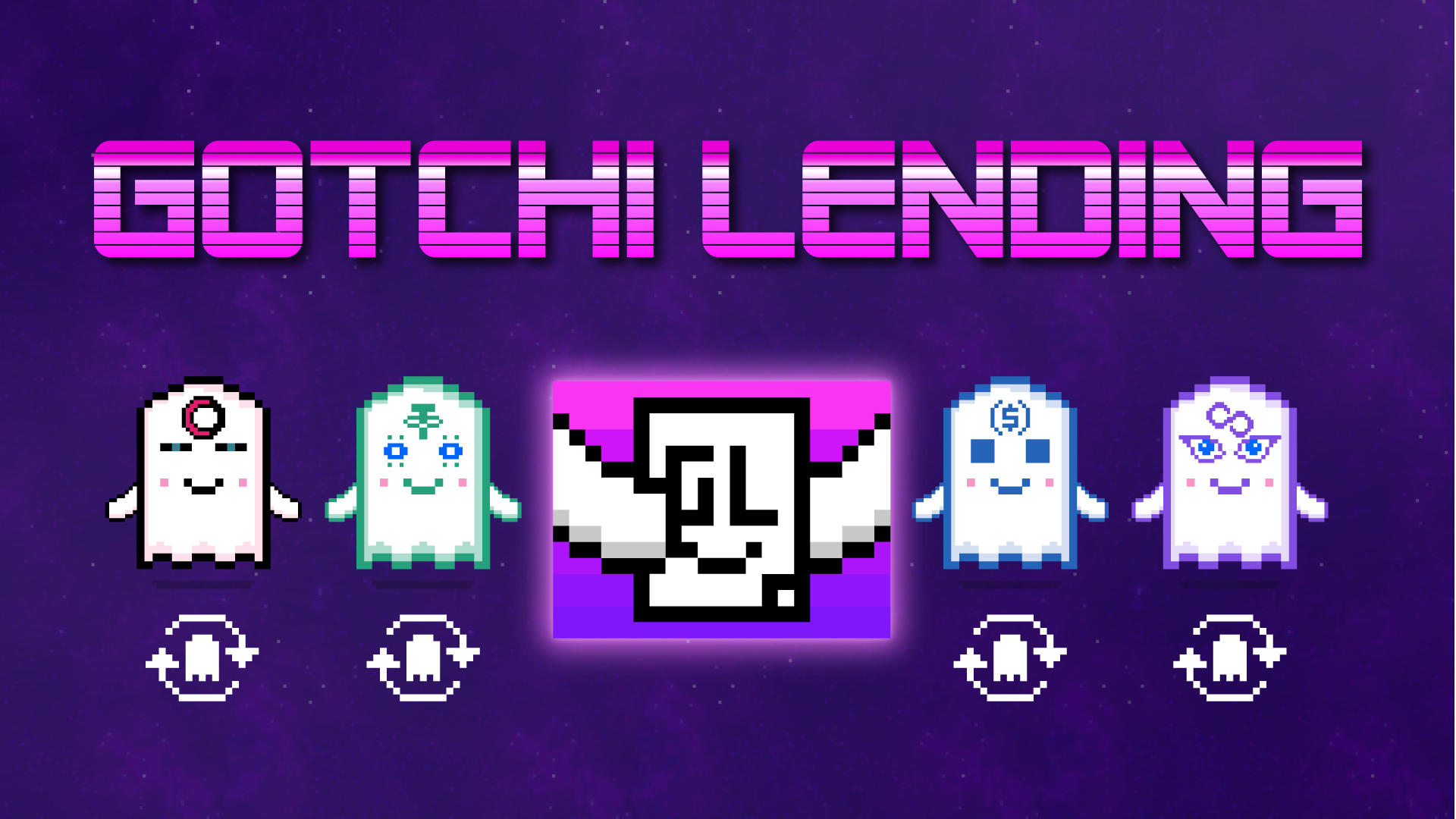 What is Gotchi Lending?

Gotchi Lending is the Aavegotchi Protocol’s sharing economy, that allows users to lend their Aavegotchi NFTs out to other players for a set period of time.

The owners of the Gotchi are able to set:

Gotchi Lending is 100% on the blockchain, allowing for the seamless, trustless, and secure sharing of Aavegotchi NFTs.

What can I do with Gotchi Lending?

Gotchi Lending is useful for anyone who own an Aavegotchi. It’s also useful for anyone who wants to play in the soon-to-launch Gotchiverse. Large guilds will be able to utilize the feature to get the NFTs into the hands of their members, and will even have the ability to share earned funds to the guild’s treasury wallet.

Individuals will be able to make use of Gotchi Lending as well, by making their Aavegotchis available publically to earn passive income, or even allowing friends and family to play as their Aavegotchi for no cost.

Additionally, the token sharing options now include GHST in addition to the four types of Gotchus Alchemica. This is particularly important during Rarity Farming seasons, because lenders will get to determine what, if any, portion of an Aavegotchi’s GHST balance they wish to share.

The lender could also specify a whitelist ID containing the addresses that are eligible to borrow the Gotchi. You can find your whitelist ID in the whitelists page. 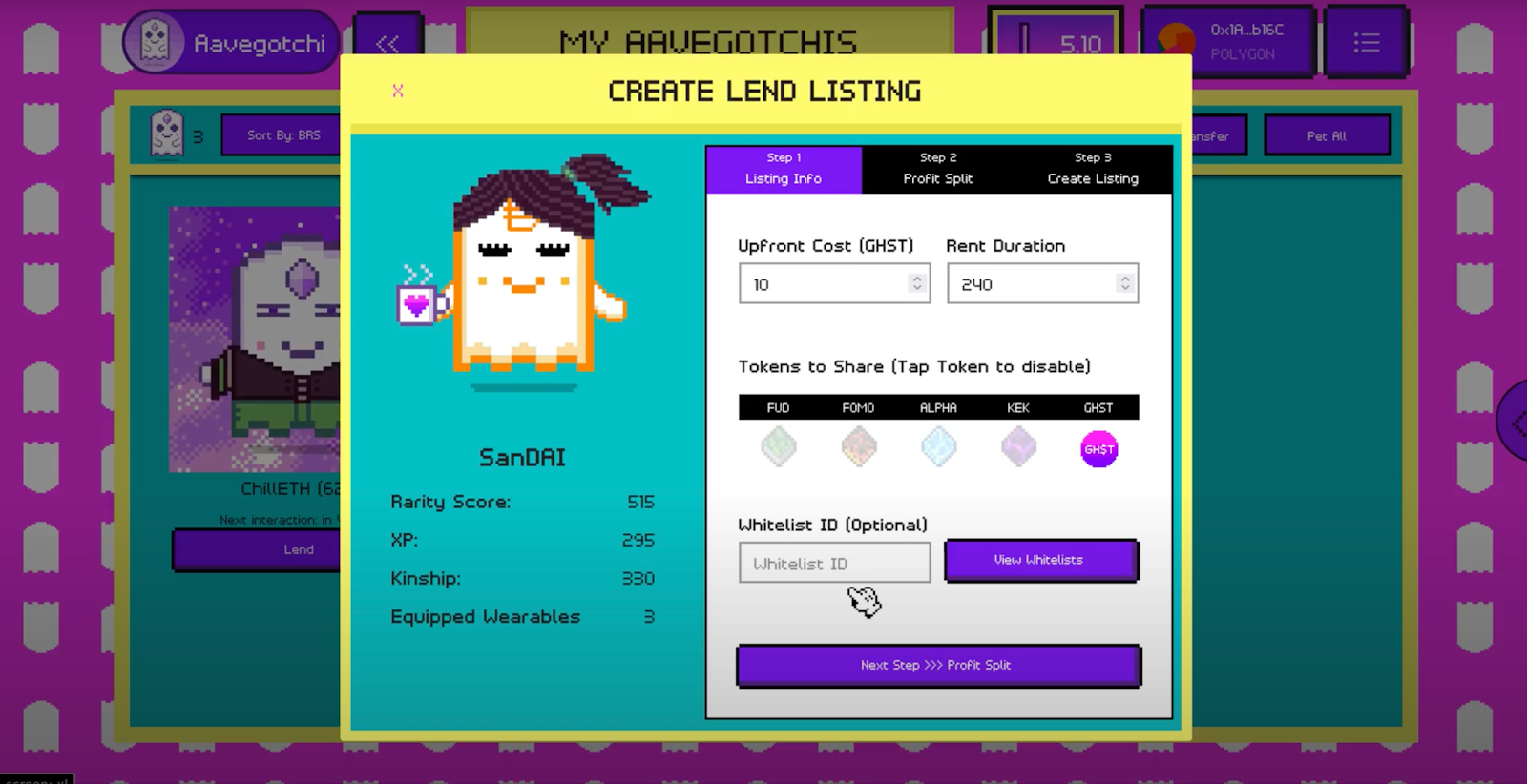 Next they will set the profit split, including the option to send earnings to a third-party address such as a guild wallet. 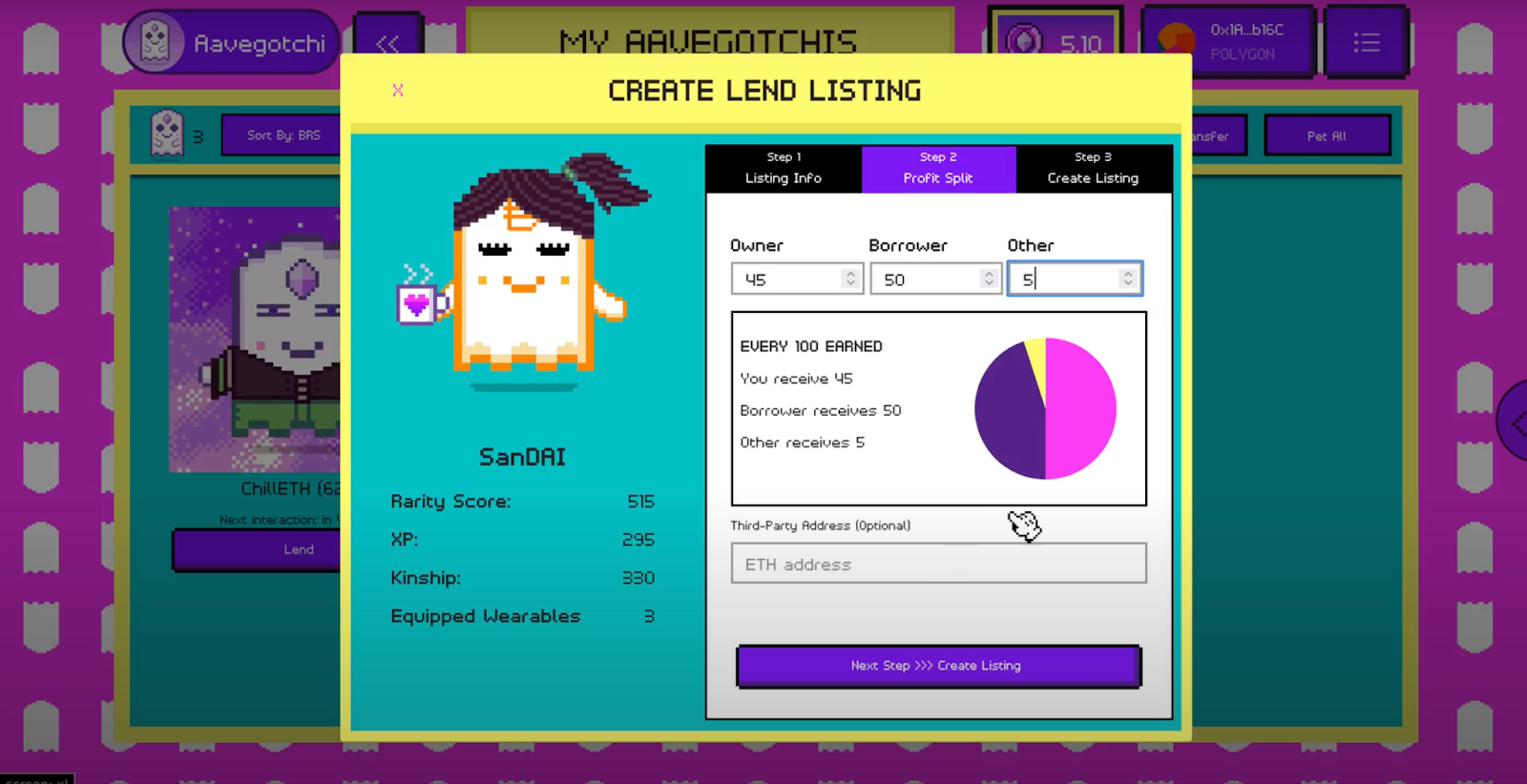 Finally, the lender reviews the terms one more time and creates the lending listing. 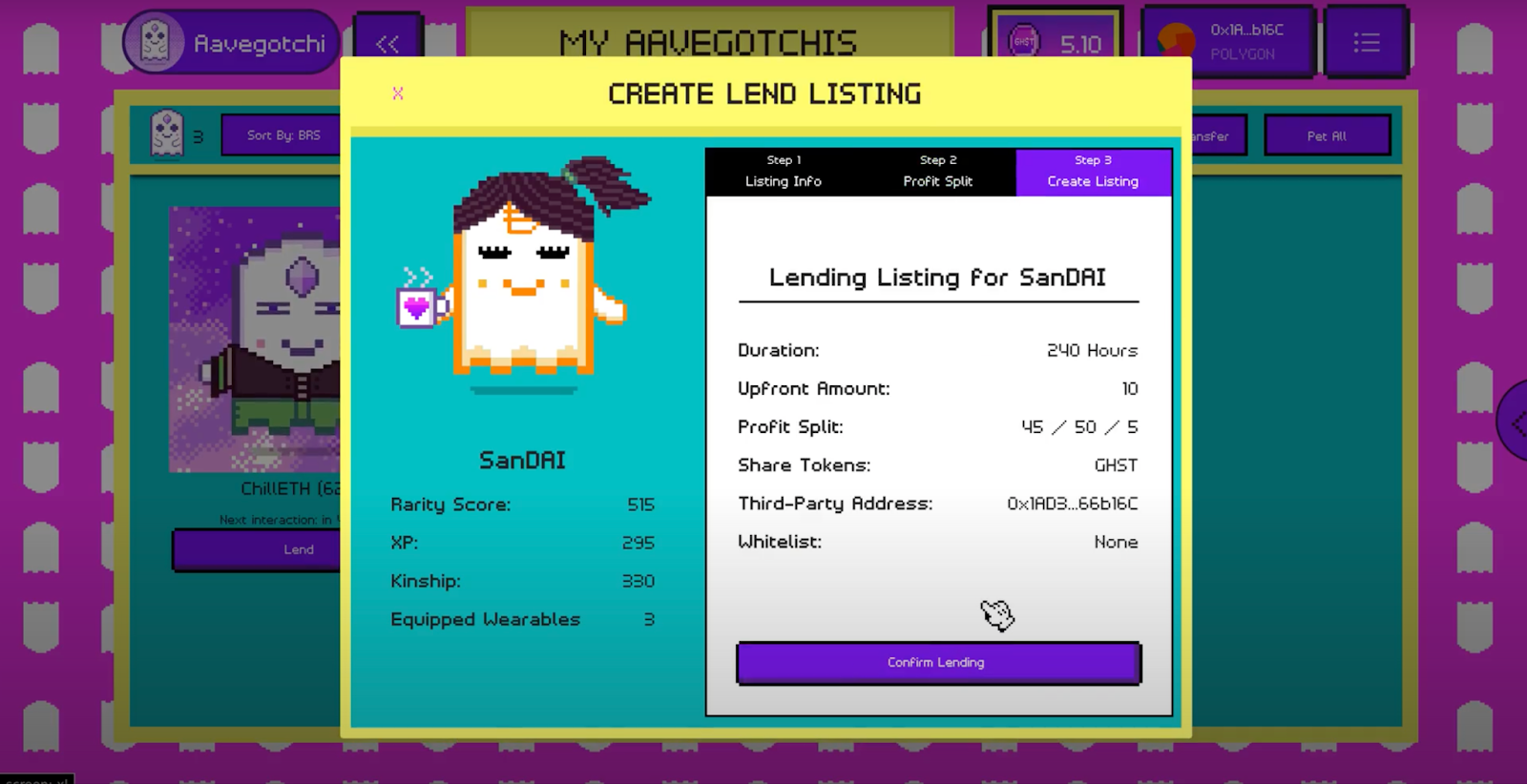 Lenders will also have the ability to create whitelists, making their Aavegotchis available only to an exclusive group of borrowers. This feature is perfect for guilds who want to make sure their Aavegotchi NFTs get into the hands of members of their guild. 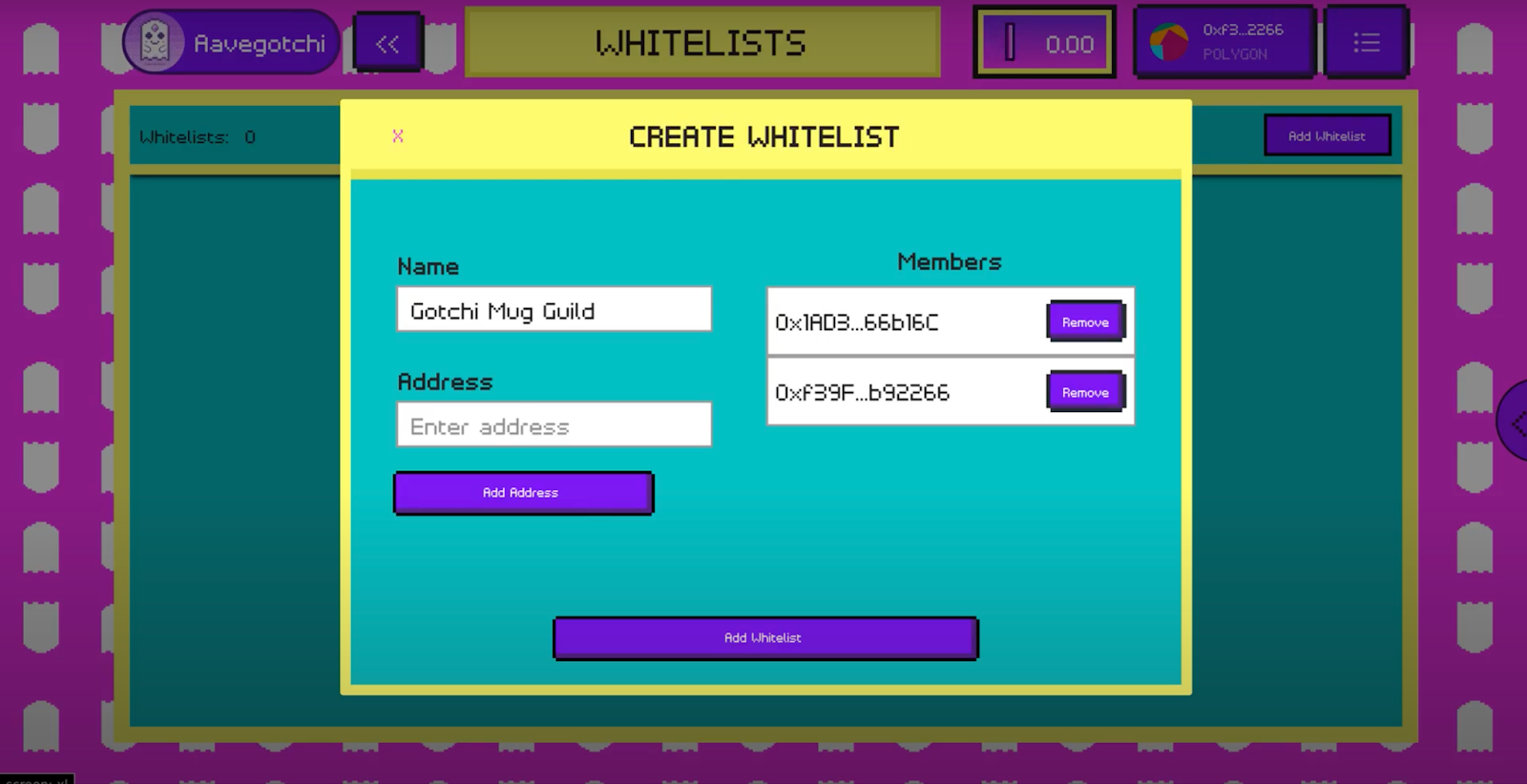 On the other side of the coin, borrowers will have a number of filters at their disposal to allow them to find the Aavegotchi that best suits their needs. Aavegotchis available to borrow can be filtered by earnings split, upfront cost, duration, and shared tokens.