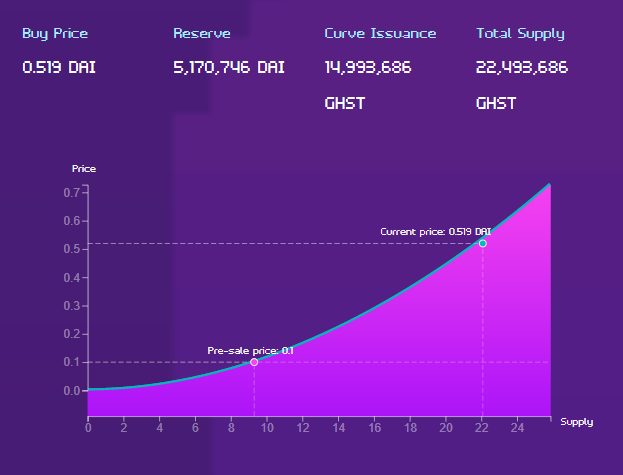 A token bonding curve (TBC) is a mathematical curve that defines a relationship between price and token supply.

When a token is purchased via a TBC, each subsequent buyer will have to pay a slightly higher price for each token, generating a potential profit for the earliest investors. As more people find out about the project and the buying continues, the value of each token gradually increases along the bonding curve. Early investors who find promising projects early, buy the curve-bonded token, and then sell their token back can earn a profit in the future.

Bonding curves come in different shapes and sizes. For the Aavegotchi project, the team adopted the Bancor Formula:

The Reserve Token refers to the token that users stake into the bonding curve.

The Continuous Token refers to the token that is received from the bonding curve upon staking the Reserve Token.

In the case of Aavegotchi, the Reserve and Continuous Tokens are DAI and GHST, respectively.

The Connecting Weight (also known as Reserve Ratio) represents a fixed ratio (between 0 and 100%) between the Continuous Token's total value (total supply × unit price) and the value of its Reserve Token balance. This CW is constant by the Bancor Formula as both the Reserve Token balance and the Continuous Token’s total value (a.k.a. 'market cap') fluctuate with buys and sells.

The Connecting Weight determines how sharply a Continuous Token's price needs to adjust in order to be maintained with every transaction, or in other words, its price sensitivity.

Aavegotchi's Reserve Ratio is 33% frens! This means you don't need to fear dem whales. They can't pump & dump GHST as the bonding curve is hardened against their huuugge transactions!

If you wanna see it in action, check out this interactive model of the bonding curve Coderdan made here.

TEH CURVE IS FOREVER!

The Aavegotchi Bonding Curve was created on 14 September 2020 via a bonding curve smart contract powered by Aragon Fundraising. After the conclusion of a presale for 500,000 GHST, the bonding curve was immediately opened. The bonding curve is unlimited in size, has no time limit, and offers an opening price of 0.2 Dai per GHST. It has a connecting weight of 33%.

You will have to complete KYC in order to purchase straight from/sell to the curve. Compliance is important my dudes - we live in a society, and we also don't want the project to get rugged by the government. Purchases from the curve are made in DAI. The reverse also applies; you can sell your GHST back to the curve for DAI, but why would you wanna do that? :( :( :(

If you are unable to perform KYC because of your citizenship, don't worry! You will still be able to interact with every other part of the Aavegotchi metaverse. You simply have to purchase your GHST off a DEX such as Uniswap or Balancer, or a CEX like OKex instead. Learn how to get GHST tokens here.

A Decentralized Autonomous Initial Coin Offering (DAICO) is a new fundraising method that seeks to incorporate the best features of a Decentralized Autonomous Organization (DAO) with those of an Initial Coin Offering (ICO) in order to create a structure that provides a higher level of effectiveness to the token sale fundraising model. A DAICO is a model whereby investors have control over the funds collected once the fundraising is over. The investors could influence how developers have access to the funds and at what frequency through a "tap" mechanism. In addition, investors can also vote to do away with the project and have their funds returned.

The Aavegotchi project launched the token bonding curve through a DAICO on Aragon.

This is SAFU. Do. Not. Remove. The. Bonding. Curve. It prevents investors from getting rugged as they ultimately have control over the funds within the DAICO/bonding curve!

The first iteration of AavegotchiDAO launched in tandem with the GHST distribution on the bonding curve. GHST holders had the power to vote on increasing / maintaining the funds distributed by the tap mechanism of the token bonding curve (TBC) reserve to Pixelcraft Studios (the team behind Aavegotchi) to support development. The first AavegotchiDAO proposal of increasing the Aavegotchi DAICO tap from 50,000 DAI to 100,000 DAI per month passed with 99% approval on 18 October 2020.

The inflation of GHST tokens through net purchases on the bonding curve is positively correlated to the GHST price. The bonding curve has been mathematically programmed to increase the price of GHST as the circulating supply of GHST increases.

For users who have completed KYC, they will be able to arbitrage the GHST price differences between the token bonding curve and other DEXes such as Uniswap and Balancer. According to Investopedia, "Arbitrage is the purchase and sale of an asset in order to profit from a difference in the asset's price between markets. It is a trade that profits by exploiting the price differences of identical or similar financial instruments in different markets or in different forms. Arbitrage exists as a result of market inefficiencies and would therefore not exist if all markets were perfectly efficient." This is possible as DEXes come equipped with their own Automated Market Maker (AMM) formula and the net purchase/sale actions of GHST tokens on these DEXes would result in prices that are different from the token bonding curve. A savvy investor might consider exploiting such inefficiencies in the market (alpha leak here).